Read the first few pages for free at www.milkywaybooks.com

Although the story is fictional, there are deep inner meanings in it for you to decipher.

A few words about the cover:
The cover of the book depicts two snakes each curved around in a circle. They are attacking each other as well as each trying to swallow their tale. 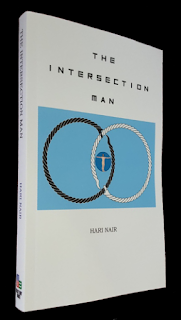 The snake-eating-its-tail is an ancient symbol, known as the 'Ouroboros' to the Greeks and is found across almost all mystical and religious traditions, known by different names. To the ancient Egyptians, it appears as a motif in the 'Enigmatic Book of the Netherworld' in the tomb of Tutankhamun. In India, this self-eating snake can be found encircling the dancing Nataraja aspect of Shiva. It is also found in Norse mythology and many alchemical treatises.
It represents the cyclic nature of the universe and each of these snakes symbolize a parallel universe the protagonist Levan Lamarr resides in.
Two such Ouroboros, one black & one white, are juxtaposed to derive yet another mystical symbol, known as the Vesica-Piscis. The Vesica-Piscis is another symbol extensively found in Christian art to depict Christ as a being living simultaneously in the two worlds of Heaven and Earth.
On a scientific/mathematical level, the image is a Venn diagram depicting the Intersection of two sets.
The central human figure is Levan Lamarr, lying in the pod of the Entangler undergoing the process of healing described in the book. It is also reminiscent of the famous Vitruvian man drawing of Leonardo Da Vinci that sets out the perfect proportions of Man.
In the book, Levan Lamarr is not just at the intersection of the two worlds, but, according to the words of the scientist, Dr. Jonah Salter "is the intersection itself".
Here's a video on the book, with much more detail. It is in HD, so please view it on full screen:

A Short Synopsis:
The year is 2025. Levan Lamarr, a former Marine, is dying of cancer. His wife, Mira, is pregnant and due to deliver their first child in a week.
He is approached by a mysterious scientist, a Dr. Salter, who offers him a chance. His device, 'The Entangler', can, in theory, reset the health of the patient to any point in the past. But in the process, it creates a Quantum Entanglement between two of Levan's bodies, each of which is in a parallel universe (according to the Many-Worlds Theory). Both bodies share a single consciousness. The entanglement is temporary and expected to last a few days.
Levan, who is cured, perceives both universes superimposed. Initially, both universes are identical until Dr. Salter causes a divergence. But a series of unexpected events follow and things go horribly wrong. Levan is finally faced with the most difficult choice any man can face.
Posted by urbanyogi at 8:14 PM