This is the text of an email I sent to many of the leading scientists currently working on Dark Matter/Dark Energy. I had started sending similar emails since mid 2012, when I thought about the 'Perforated Universe Hypotheses'. Most did not respond, and among the few who did, some said they didn't read it since there was no 'Math', and the one who did 'quickly browse through', did not find anything wrong with my reasoning, but thought my hypotheses was 'unlikely' without elaborating why. Anyway, I thought I will post it as a Note here:

My name is Hari Kumar and I am from Canada.

I am looking at the Dark Matter mystery more from a detective’s perspective than a scientist’s :) .

What we seem to know is that the total mass–energy of the known universe contains about 5% ordinary matter, 27% dark matter and 68% dark energy. That is to say, dark matter should account for more than 5 times the mass of normal matter that makes up the visible stuff. Yet it has not been detected on Earth even with our most sensitive dark matter detectors such as the LUX detector. Moreover, from what I have read so far, I get the idea that scientists are certain of the presence of Dark Matter in halos of galaxies, yet am I right to say that it has not yet been detected within the galaxies themselves?

Could it be possible that the LUX detectors could not detect Dark Matter simply because there isn’t any in the vicinity of our Earth? That would essentially mean that Dark Matter distribution is perhaps non uniform across our galaxy. Since it seems to be localized in galactic halos, and perhaps such regions that are gravitationally neutral (I am not sure I am using the right term here, what I mean is regions of space that have little gravitational influence from other massive bodies, like Lagrangian points) and not in the vicinity of the gravitational field of massive objects, isn't it more plausible that Dark Matter is actually gravitationally repulsive with respect to normal matter?

Hence, the place to look for Dark Matter may not be on Earth, but rather in regions of space that are beyond the gravitational influence of massive objects. Even our Sun and planets (including our Earth) may be wrapped by very soft shells of Dark Matter. Since unlike normal matter, which has a tendency to clump together at larger scales due to their gravitational attraction, Dark Matter would be much less dense and dispersed fairly uniformly in the remote intergalactic regions  of our Universe. They may be found within galaxies too, but over time they may have a tendency to ‘bubble up’ or ‘bleed out’ to the peripheries of the galaxy due to the dynamics of star motion. Thus a way to test this is to confirm by observation that the presence of dark matter within galaxies may be higher for galaxies that are further away from us. In other words, the closer the galaxy is the greater is the concentration of dark matter in its outer galactic halo and lesser within (Matter and Dark Matter will be more separated).
Now, what is this ‘Dark Matter’ and why is it gravitationally repulsive with respect to normal matter? My understanding of General Relativity tells me that (attractive) gravity is the (negative) curvature of space-time caused by matter within our universe. Then, would it be right to assume that matter outside our universe can positively curve our space-time thus causing gravitational repulsion? Therefore Dark Matter could in essence be matter in this universe but not of this universe. To elaborate, Dark Matter could be matter contained in microscopic bubble universes within our own universe. Hence Dark Matter is both outside our universe and in our universe! They are separate universes since they are bounded by spatially 2 dimensional M brane ‘bubbles’ or perforations. Since with respect to our universe, they would be positively curved, these spatial bubbles would be gravitationally repulsive with the normal matter of our universe.

The accumulation of ‘foamy’ dark matter in the peripheries (halos) of the galaxies, would in effect act somewhat like the hemispheric walls of the ‘wall of death’ acts in carnivals and circuses, where motorcyclists have to travel at greater speeds to remain circling inside the sphere and farther away from the centre. The further up they have to move, the greater the speeds they need to maintain. 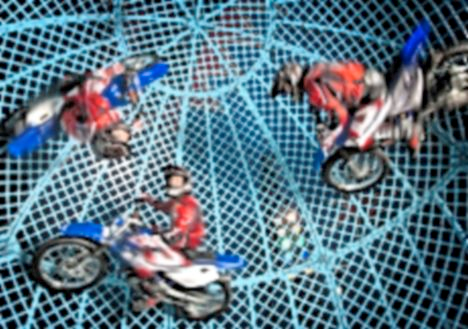 The motorcyclists are like the stars at the outer periphery of the galaxy that are under the influence of the repulsive forces of the dark matter, which forces the stars to speed up to maintain the outer orbits.
In the process, these stars may lose mass due to the effects of the dark matter foam, thus causing loose clouds of extremely hot gases in the peripheries. Also these stars are likely to be much smaller than those closer to the galactic centre. These too can be checked by observation.

The foamy dark matter’s repulsive push would be proportional to the mass of the normal-matter body that it comes in contact to. Thus it is unlikely to pose much detectable resistance to smaller objects like meteorites and almost no measurable gravitational effects on light. However, bending of light due to dark matter may still be effected due to something similar to optical refraction (due to the layering of dark matter—the finer/smaller bubbles of dark matter is likely to be present closest to the surface of the massive body. The attached image of the Dark Matter Shell structure would shed more light).
This idea of dark matter as space-time perforations (or foam), may eliminate the need for a separate theory of ‘dark energy’ to explain the accelerated expansion of the universe, since the continued accumulation of repulsive dark matter would fuel the observed accelerated expansion.

Additionally, the presence of repulsive dark matter from the moment of the Big Bang can also satisfactorily explain why the entire mass of the universe did not collapse back into a Black Hole moments after the Big Bang. In fact, I think it is more plausible that the exponential expansion immediately following the Big Bang was propelled largely due to this repulsive Dark Matter than any faster than light expansion of space.

In summary this idea, which I call the "Perforated Universe Hypothesis" proposes an integrated explanation for Dark Matter and Dark Energy. Dark Matter as extradimensional matter trapped in "perforations" in our universe's 3 dimensional (excluding time) space, where only the gravitational effects leak through. They are wrapped in closed 2 dimensional M branes, much like fine bubbles. Since their space-time is positively curved with respect to our universe, they would be gravitationally repulsive with matter in our universe. Hence this dark matter would only be present in gravitationally neutral areas outside concentrations of matter such as stars and planets, akin to a foamy but invisible shell around planets, stars, planetary systems and galaxies. They would be exerting a "soft" repulsive force towards normal matter. This explains the presence of dark matter in the halos around our galaxy, whose repulsive push keeps the stars in the periphery within orbits inside the galaxy. Also as the repulsive force that pushes galaxies apart causing the observed accelerated expansion of the universe. For more details see the link below.

Thank you for your patience.

After sending the above message, more evidence that supports my hypotheses has been observed: 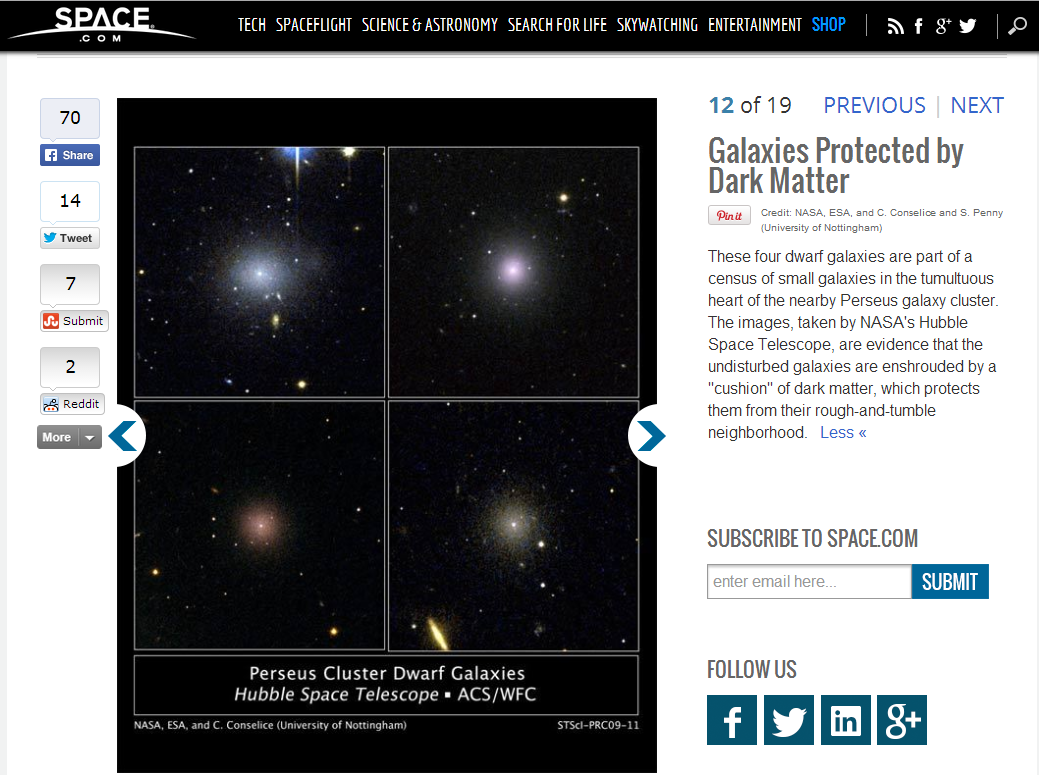 Posted by urbanyogi at 6:01 PM

I saw a youtube video entitled "The Primer Fields", and his hypothesis is that there is no dark energy or dark matter. You might find it to be an interesting video as well.
Thanks for your work, and good luck!

I saw a videoon youtube "The Primer Fields", where he suggests that there is no dark matter or dark energy. I think you'd like it.